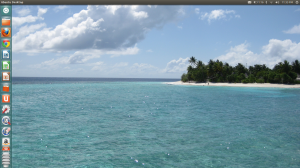 After my 8-year old laptop refused to work this year, I looked for a while to buy a new one. The Lenovo ThinkPads looked good, they are quite popular among Linux fans. Sony and Apple make good machines as well. Finally I decided to buy a new Samsung Series 7 “chronos” laptop, and tried to create a dual boot system for Windows 8 and Ubuntu 12.10. This turned out to be more difficult than expected.

By default the machine has Windows 8 installed, uses UEFI and has “Secure Boot” switched on in the BIOS by default. After I switched “Secure Boot” off in the BIOS (and set it to “UEFI and CSM OS”) I was able to install Ubuntu, by booting from CD with Settings/Change PC Settings/General/Advanced Startup in Windows 8. The installation was cumbersome, because after the installation and the restart of the machine somehow ignored Ubuntu and booted only Windows 8. With the help of Boot Repair it finally worked.

So now I have got a new Samsung Series 7 laptop with dual boot setup for Windows 8 and Ubuntu 12.10. Or so I thought. Windows 8 starts fine, but if I wanted to start Ubuntu regularly the following Machine Check Exception error occured:

As you know kernel panic is the Linux equivalent of the Windows Blue Screen of Death. Something which you don’t want to see too often. It certainly does not sound good. The laptop started to reboot every time after the Kernel panic. The second boot trial often worked, but the Kernel Panic errors were of course annoying. I wondered if it is a Kernel or a driver problem. I deactivated Hyperthreading in the BIOS and also disabled the Execute Disable Bit (EDB) flag in the BIOS. EDB is an Intel hardware-based security feature that can help reduce system exposure to viruses and malicious code. Then the error did occur less frequently, but it still appeared occasionally.

Finally I found a Kernel bug report 47121 where someone reported that it maybe helps to set the “OS Mode Selection” in the BIOS to “UEFI OS”, instead to “UEFI and CSM OS”. The packages and libraries that are loaded seem to be different. I needed to switch to “UEFI and CSM OS” to install Ubuntu in the first place. Now I had to switch it off again. But after I switched it back to “UEFI OS” the Grub boot meanu now seems to have a higher resolution and – it booted without errors. It looks like UEFI was the root cause for all the major troubles.

Thus if you get a Kernel Panic error on a Samsung Series 7 and Series 9 laptop like the above one, then have look at the BIOS settings. Deactivate all advanced settings to increase performance like Hyperthreading and EDB Bit, and set “OS Mode Selection” to “UEFI OS”. Using the right BIOS settings the laptop from Samsung works really well, with both Windows 8 and Ubuntu 12.10. It is a nice machine, high quality, good equipment, comparable in every aspect to a Macbook Pro (just like the Samsung Galaxy S2/3 is like the iPhone 4/5, and the Samsung Galaxy Tab is like the iPad).